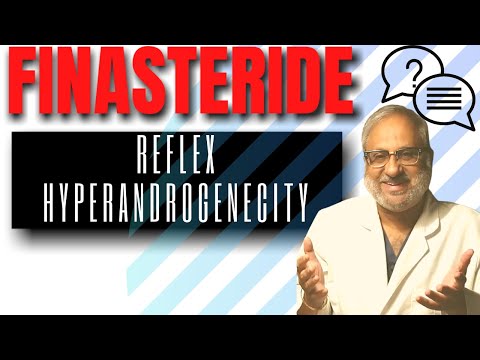 Treating hair loss in hair loss sufferers who agree to using DHT blockers is challenging. The way the body behaves and the distinct individual metabolism, varying life time goals and psychology dictate that the regimen and dosage is tightly monitored and treated from time to time so we have the best drug that with minimum dosage gives maximum regrowh and stability of hair loss with minimal or no side-effects.

This works in a vast majority of patients.

In a minority, the drug can be challenging!

This talk is in response to a Question I was asked yesterday- “Doctor, why not block 100% DHT to maximise effects of Finasteride?” Why we don’t do this is due to Reflex Hyperandrogenecity hat is occasionally encountered with higher doses or due to atypical patient response. This phenomenon, called REFLEX HYPERANDROGENECITY, overcomes the hair protective effect of Finasteride is not yet not well studied and documented. But the good news is that like side effects in the use of Finasteride, this too is extremely rare.

It has at times been seen, and not too infrequently, that side effects of Finasteride when they occur gradually disappear and this is due to upregulation. And in some cases there is excessive facial oil, increased pimples, and a greatly elevated libido. Especially the latter is not what you expect when the stated though rare side effect of Finasteride is decreased sexual libido, desire and performance.

To understand Reflex Hyperandrogenecity, we should have a basic knowledge of Upregulation and Downregulation by Cells.

Although a given hormone may travel throughout the body in the bloodstream, it will affect the activity only of its target cells; that is, cells with receptors for that particular hormone. Once the hormone binds to the receptor, a chain of events is initiated that leads to the target cell’s response. Hormones play a critical role in the regulation of physiological processes because of the target cell responses they regulate. These responses contribute to human reproduction, growth and development of body tissues, metabolism, fluid, and electrolyte balance, sleep, and many other body functions.

When we try to regulate these hormones like for instance decreasing DHT levels by taking Finasteride, the body is not sleeping. If the hormone levels are sensed as insufficient by the body to meet cellular needs for maintaining bodily function, it will autoregulate.

How do you define Upregulation?

Upregulation is essentially an increase in the numbers of receptors on surface of target cell to make them more sensitive to a given hormone. The example is increase in uterus oxytocin receptors in the final stage of pregnancy, promoting the contraction of the smooth muscles enabling labour and facilitating childbirth.

Cells have the innate capability to increase/decrease their hormonal receptors on the plasma membrane depending upon signals of increasing or decreasing levels of the hormones. Receptors are proteins and cells manufacture them on their own.

When the cell increases the number of receptors, it is called Upregulation and the reverse is Downregulation.

Upregulation happens due to one of 3 reasons:

This is an effort to increase or decrease their sensitivity to specific hormones so the chances of interacting with the hormone are greatly achieved..

The same thing happens in some patients due to low levels of DHT- the body seeks to achieve an equilibrium through upregulation -increasing the sensitivity of DHT receptors in cell membranes of target cells.

And this can happen as early as after a year of using Finasteride, mostly in very high doses with or without Dutasteride that a phenomenon called Reflex Hyperandrogenicity occurs.

Whenever the effects of androgens in the body are lessened by either lowering DHT or by systemic hormone blockade, the body seeks equilibrium and or a reset through a process called upregulation. This can take either of the 2 courses:

In some this upregulation overshoots the mark resulting in significant hyperandrogenecity leading to greatly elevated libido, increased oil gland activity on the face .

So a mix of upregulation and downregulation are dynamic processes of the body to achieve hormonal equilibrium in an effort to meet cellular need.

So, in short, how drugs act, how body responds at the cellular level and many other factors are so complex that Finasteride cannot be said to have a single dose or treatment schedule that will benefit all segments of hair loss sufferers. Dose modulation and microdosing are far too complex to follow hearsay on the forums. You need a doctor to guide you through.