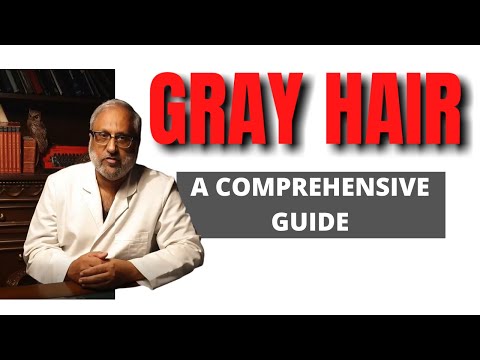 Your first gray hair is a rite of passage, a reminder that you're getting older, wiser, and that you are blessed to be a vibrant human being. Like laugh lines, gray hairs are a totem of a life well lived.

Your hair follicle possesses pigment cells that produce melanin, a chemical that colors your hair and is specific to your racial group and ethnicity. Melanin cells are unfortunately short lived and after the hey days of youth start to die off. But as this dying out is gradual and not sudden, as hair fall and new hairs grow, every subsequent strand comes out stained lighter by your in-built coloring factory. This is like the ink cartridge of your ink-jet printer when it starts to run out of color. So hairs fist become various shades of gray, then silver and finally a pristine white.

One might blame one’s boss and a demanding workplace or your spouse or significant other but the fact is it’s mostly your genes that dictate how early and how quickly graying happens. If your parents had a scalp replete with gray hair in their youthful years, there’s a good chance you will, too.

If you look at photos of President Obama taken before he ran for president and since he left office, you’ll notice a distinct difference: where there used to be only dark brown hair, there is now far more gray than brown. It seems that the stress of running a country would turn any person’s hair gray. But is stress really to blame? And why does hair turn gray, even for those of us who don’t have jobs quite as stressful as the President of the United States?

When graying happens is also dictated by your racial type. In Caucasians, hair start to gray in the mid-30s, in Asians late 30s. and in African Americans mid-40s.

Some go gray 10 or 15 years earlier than the average person would. So it is premature graying if you go gray at 20 if you are a Caucasian and at 25 if you are an Asian.

And when this happens, it can cause low self-esteem and can manifest as socio-cultural maladjustment.

Stress can trigger a common condition called telogen effluvium, which causes hair to shed about three times faster than normal. The hair grows back, so the condition doesn’t cause balding. But if you’re middle-aged and your hair is falling out and regenerating more quickly because of stress, it’s possible that the hair that grows in will be gray instead of its original color.

Hair grows for 2-4 years and then sheds as part of the encoded shedding process an intrinsic component of the hair cycle. Soon, a new hair takes its place. And everytime it grows back, it passes through a dying process. With every passing recycling of hair, this dye or melanin gets depleted since pigment forming cells wear out with each pass and hairs that subsequently grow back are stained lighter and lighter till in the 30s they are noticeably gray, then silver and finally white.

The hair dying apparatus is like a printer. It comes with a fixed amount of ink. But the difference is, in human hair, you cannot replenish it. You may in the future, but not yet.

Reduction in melanogenically active melanocytes in the hair bulb of anagen hair follicles with resultant pigment loss is central to the pathogenesis of graying. Graying of hair is usually progressive and permanent, but there are occasional reports of spontaneous repigmentation of gray hair.

Gray hair is finer than deeply pigmented hair. However it may seem more dry and coarse since the scalp produces less oil as we age. It also feels rough since we have the habit of constantly pulling out gray hair when the first crop starts to appear in the 30s. Repeated pulling of hair can cause follicular distortion and the resulting hair is coarser and crinkly. An old wives’ tale has it that if we pluck a gray, three will soon take it’s place. That doesn’t happen though. But by plucking gray hair, we are just delaying the inevitable. Also we are damaging the follicles and soon they may no longer grow hair like happens in trichotillomania.

There can be many causes besides age that result in a person’s hair turning white.

What are the anti-aging compounds of use in treating gray hairs?

Shampoos are largely ineffective as anti-aging agents due to water dilution and short contact time, and antioxidants such as vitamin C and E in these preparations protect fatty substances in the shampoo from oxidation, and not the hair.