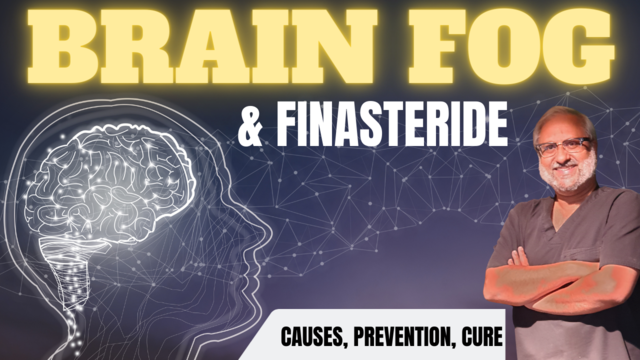 Brain fog can be said to be a lifestyle disorder rooted in a lifestyle that promotes stress and alters hormonal balance.

Though Finasteride has been in use for 40 years as an approved treatment treatment for androgenic alopecia, it is only in the past 5 years that more young men on Finasteride are blaming it for brain fog today than say 10 years ago. And this is counter-intuitive because lesser older men report this problem when on Finasteride.Â

I have had young patients saying brain fog persists after stopping Finasteride and others who say it goes away after stopping the drug as the brain rewires.Â

Though people wantÂ  clear cut answers to their problems this is impossible. No one knows how two individuals respond to similar stimuli. How their brains are wired.

When on Finasteride, it consumes every living moment in the lives of some men. So let’s leave Finasteride alone for a moment.

Most people have experienced brain fog. It is often described as a cloudy-headed feeling. And itâs incidence in the general populationÂ  is increasing.

Is the increased screen time after the advent of computers & android phones to blame?

So let us get to the root of the problem.

Brain fog is characterized by confusion, forgetfulness, and a lack of focus and mental clarity.Â

Symptoms of brain fog are often innocuous and most of us experience this in daily life too. Even without Finasteride. Symptoms like-Â

-Losing your train of thought

-Difficulty in remembering what you just read

-Forgetting recipes and steps while cooking

-Once distracted not knowing what you had been doing

Last year 2020 was a stressful year for us emotionally. Did some of us not experience similar symptoms then. Even when we were not on Finasteride?Â  This was brain fog. Brain fog is real. It is known to last from a fleeting moment in time to a few years. Though not a medical condition, it can be a red flag sign of an underlying condition.

Likewise, lack of sleep is pretty common when you are in a heightened sense of anxiety. Lack of sleep affects our ability to make memories.Â  For during NREM (non-rapid eye movement) sleep, the brain filters important memories. On the other hand, REM (rapid eye movement) makes memories concrete- consolidates memories. So when you do not get 7 hours of sleep your brain ia handicapped in consolidating your memories for you.Â  This leads to what is called Brain Fog.Â Â

Additionally, stress increases cortisol levels which in turn leads to poor cognitive function and impaired memory and that leads to brain fog too.Â

Research has also found that chronic stress can lead to enlargement of the Amygdala (the Fear Center of the Body) and regression or atresia of the prefrontal cortex thereby weakening connections in the brain responsible for memory and also creativity.Â

In todayâs context, Brain Fog is more common and its chief causes can be overwork, lack of sleep, stress, and spending too much time on the computer or phone.

On a cellular level, brain fog is believed to be caused by micro-inflammation of neural structures and changes to hormones that determine your mood, energy and focus. Hormonal imbalance disrupts the neural pathways.Â

In turn, brain fog syndrome can lead to obesity, disturbed menstruation, and even diabetes mellitus.

The common causes of Brain Fog are:

This can result in various sleep disorders, wakefulness and insomnia, headaches, fatigue, impaired cognitive function, mood swings, irritability, forgetfulness, low motivation and drive, lack of idea to solve problems at hand, decreased ability to focus on a discussion due to lack of concentration, excessive absences and also mild depression.

When a patient on Finasteride reports this problem, he first needs counseling to rule out a psychosomatic reason, and is observed for a specific duration and told to:

Besides effects on GABA receptos, Finasteride rewires the hippocampus, the section f the brain that processes emotional responses, leading to depressive states and suicidal ideation.Â

Stress and anxiety can also result from potentially inhibited sexual function. And stress-erectile dysfunction-stress is a vicious cycle too.

(Hay, Bancroft, & Johnstone, 1994; Klein, Versi, & Herzog, 1999; Robinson & Ismail, 2015). This exploratory study suggests an analogous association, by which possession of a familial and/or a personal history of an Axis I mental health disorder, becomes an independent marker of anomalous brain substrate that, by some as of yet unknown mechanism, puts this sub-group at increased risk of experiencing intractable emotional disorders triggered by finasteride therapy.

Another hypothesis is that epigenetic factors may have a role to play when brain fog is blamed on Finasteride .Â

It is stressed that prescribing hair loss doctors while counseling patients need to obtain exhaustive past and familial psychiatric histories before starting this drug.Â Â

Follow these simple rules if you have brain fog due to Finasteride: